Voyagers, for clarinet and string quartet, is a tribute to the two Voyager spacecraft on the 40th anniversary of their launch, and of the music of the Golden Record, sent to accompany them on their journey out of the solar system. The piece was composed for my dear friends, the Cassatt Quartet and clarinetist Vasko Dukovski; it has been a delight to take this musical and astronomical journey with these superb performers.

Voyagers focuses on several of the pieces that were part of the Golden Record, weaving them together in a composition that celebrates humanity’s quest to explore the universe, and the power of music to express the rich emotional and cultural world of human beings. The creators of the Golden Record chose an idiosyncratic selection of pieces from around the world, and I have in turn chosen several of these pieces— a late Beethoven quartet (Cavatina), an Indian Raga (Bhairavi), and a Renaissance dance (Galliard).

Writing this piece was in itself a wonderful journey, especially doing research to learn more about the Voyagers’ remarkable mission, and about the selection of the music, sounds and images of the Golden Record. The piece is not meant to have any literal description of the Voyagers’ travels and discoveries, but rather to use the selections from the Golden Record to evoke our human feelings about music, about space, and about exploration. I am fascinated by the idea of the Golden Record being sent to accompany the spacecraft, knowing that it would almost definitely never be found by any extraterrestrial civilization, but that it was, nonetheless, a significant message of who we were at this moment in time,
and how we might express what it means to be human.

The composition was given its premiere in November 2017 at the Hayden Planetarium of the American Museum of Natural History in Manhattan, with astrovisualizations designed by Carter Emmart, director of Astrovisualization at the Planetarium, and with Timothy Ferris, the producer of the Golden Record, sharing his perspective on the Voyager mission. The Cassatts and Dukovski are also scheduled to perform the piece four times at the Seal Bay Festival in Vinalhaven, Maine (Summer 2018), and have pending performances at several other planetariums. We are especially excited about the collaboration with the planetariums, seeing it as a linking of music, science and visual art.

The piece is in four movements, played without pause:

1) Cavatina
2) Bhairavi
3) Galliard
4) Beyond the Heliosphere

–The 1st movement, has a reference to the Raga (see 2nd movement), but has more direct references to the Cavatina of Beethoven’s op. 130 (played by the Budapest Quartet on the recording).
Listen to the Cavatina, as heard on the Golden Record.
Mystery of the vastness of space, and the plucky energy of the Voyager craft as they begin their voyage.

—The 2nd movement, functioning as a slow movement, is an extended quote and development of the vocal Raga Bhairavi “Jaat Kahan Ho”

Listen to the Raga, as heard on the Golden Record.
Images, perhaps, of humanity contemplating the unfathomable expanse of space.

—The 3rd movement, a scherzo, is based on “The Fairie Round” Galliard, a Renaissance dance by Anthony Holborne.
Listen to the Galliard, as heard on the Golden Record.
It bounds between many different characters as it explores that dance, and I think of it as both the spacecraft “dancing” its way on its journey, and also the planets and moons themselves in a great cosmic dance.

—The 4th movement brings back elements of all the excerpts, but with the Cavatina again coming back as a central element, including a fairly lengthy quote near the end. The piece fades out on a repeated high note in the bass clarinet, as if the signal of the Voyager continues on, ever more faint, as it continues its interstellar voyage. 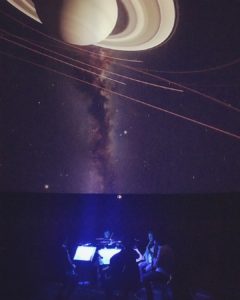 …[Clarinetist Vasko] Dukovski brought clarity and agility to both works, and also to Gerald Cohen’s “Voyagers” (2017), in which he joined the Cassatt players, on several kinds of clarinets, in a tribute to the two Voyager spacecrafts, launched in 1977 and still hurtling through space. There are, as you might expect, passages that evoke the eerie loneliness of the spacecrafts’ journeys. But much of the work is vigorously animated.

Cohen based parts of the score on pieces from the Voyagers’ golden discs – selections of music, natural sounds, speech and photographs, meant to convey an impression of Earth to distant civilizations that might decode them. His choices were a Renaissance dance, a Beethoven quartet and a Hindustani vocal piece, but though he briefly quotes each, he quickly deconstructs them and spins imaginative fantasies around their essential elements in his own freewheeling, largely neo-Romantic style…

“One of the most important tasks for the current classical music world is bringing the wonderful range of today’s classical compositions and the spectacular talents of its performers to contemporary audiences in new and engaging ways. The Cassatt String Quartet, with clarinetist Vasko Dukovski, certainly endeavored to do that with their performance of Gerald Cohen’s Voyagers, for String Quartet and Clarinet, on November 28, 2017 at the Hayden Planetarium of the American Museum of Natural History in Manhattan. Although the performance itself succeeded beautifully, and I certainly don’t question the intent of the event organizers, I think the setting may have come close to overwhelming the music. If you believe the famous theater designer Robert Edmond Jones (and I do), a set that is too small will cramp the energy of a performance, and a set that’s too big will diffuse it. I think the latter may have almost been the case at the planetarium.

That said, there were many great things about the evening. First of these was seeing new music presented in such an important venue, with a sold-out audience of well over 400 that contained many children. Second was the pre-performance talks by Hayden’s “astrovisualizer” Carter Emmert, speaking (interestingly, but perhaps a bit too long) about the Voyager spacecraft missions and author Timothy Ferris speaking about the Golden Record that was part of these missions. Third was the composer, after happily greeting his large coterie of friends, talking about his piece, describing the music of the Golden Record, on which Voyagers is based, as “the perfect way to summarize who we are.” Fourth, and best of all, was the performance of the music itself, which easily stood on its own, and more than survived a bit of diffusion.

Cohen’s program notes say, “Voyagers, for clarinet and string quartet, is a tribute to the two Voyager spacecraft on the 40th anniversary of their launch, and of the music of the Golden Record, sent to accompany them on their journey out of the solar system. The piece was composed for my dear friends, The Cassatt Quartet and clarinetist Vasko Dukovski; it has been a delight to take this musical and astronomical journey with these superb performers.”

Indeed, the audience was part of this journey through the spectacularly presented and superbly coordinated “astrovisualizations” projected onto the planetariums large dome that accompanied the performance.

The piece, played without a break, consists of 1. Cavatina, 2. Bhairavi, 3. Gaillard and 4. Beyond the Heliosphere, the first three movements based on selections from the Golden Record. This is attractive, tonal, frequently melodic music. It includes references to Beethoven and other source materials, but stands on its own as a genuinely beautiful and evocative score, with a lovely palette of emotions and textures. It struck me that the music has elements of the wonderful American music of the 1950s and 60s – not the Druckman strain, but the line from Copland, Harris, Schuman, and so many others. The effect of this music truly stays with the listener.

The Cassatt Quartet and clarinetist Dukovski gave a wonderful performance, with a beautifully integrated sound that flowed smoothly from idea to idea. Their performance was the type I’d like to accompany me if I ever have occasion to fly through the cosmos. They also convinced me that I’d love to hear this score again, but in a more intimate venue, and without “astrovisualizations.”

So, the venue was too big, but the music and the performers filled it with the beauty of the universe, and gave it a truly fine soundtrack.”